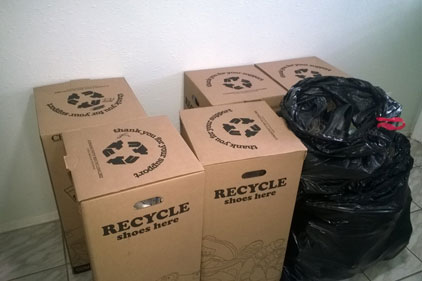 Three seniors from El Dorado High School in Placentia, CA chose GSROC as the recipient of a shoe drive they organized as part of their senior projects. Trevor Severson, Joshua Michaud and Dominic DeGraw worked for three months to organize, collect and box up shoes to be donated through a shoe recycling program run by Community Recycling. The boys ended up collecting 179 pairs of shoes that were acceptable to the recyclers, weighing 233.9lbs. That means they made approximately $116 for the dogs! They will donate any shoes that were not acceptable to Goodwill